This magazine is 'Loaded'

The latest issue of Wajibu Magazine, a journal of Social and Ethical Concern is out now. 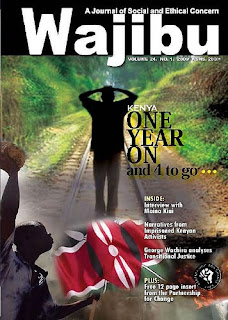 Click Here for a look at the contents in this issue.

TO FIND OUT HOW YOU CAN GET A COPY, PLEASE CONTACT DIPESH PABARI AT dpinkenya@yahoo.co.uk

Click Here to access the Wajibu Webite
Posted by Joy of Light - Farrah's 2 Sense at 3:29 AM No comments:

I posted the following post in February last year. Absolutely NOTHING has changed - in fact it's worse. Out of sheer frustration, I am posting this again.

I just cannot help feeling angry at the way our future is currently being horse-traded. Keeping my optimism levels high is becoming more and more of a chore and extremely difficult to do.

To you, Mr. Politician, I wish we could tell you to your face how we really feel about you.

I wish you could see the disdain and the lack of respect with which we regard you. I wish we could somehow find a way to let you go, and not waste any more of our precious energy resting our hopes with you - always hoping and praying that you’ll do the right thing.

What exactly is it that we owe you? Why do we even look up to you? Why did I even bother allowing myself to be momentarily uplifted by your fake and deceitful promises? Why did I invest any faith in you?

You, all of you who claim to lead us today, have, as a GENERATION have failed us. You have allowed our communal values to disintegrate. You have allowed us to become a people divided by greed, self-interest and exclusiveness.

While we wait out every day with bated breath, you continue to haggle with each other over who will retain the most power, trying to ensure that you maintain your upper hands and your control. You’re STILL not seeing the real picture – you are so blinded by your self importance, and your inflated egos, and you really don’t give a damn about what happens to millions of us.

Oh how I wish there was some way to get rid of the lot of you. How I wish we all felt more empowered, more able, more confident, more enthusiastic, more determined, because if we did, trust me – you wouldn’t stand a chance. But you know that already, don’t you? It’s why you use what you use to oppress us, to keep us down, to make us fearful, to make us insecure and uncertain. You try to destroy our strength every opportunity that you get.

What goes around, comes around. No power lasts forever. No family is always safe. The sins of the fathers will always be revisited on future generations. Maybe you’ll keep your children safe, but perhaps you’ll be around to see the legacy that you left your grand-children. You will only have yourselves to judge.

Their lives will be filled with boredom, because you eliminated diversity when you brought about your divisive thinking.

So go ahead – negotiate, horse trade, make your deals, and stick with your myopic and petty thinking.

You will pay the price, and no amount of cash is going to help you settle the bill and you certainly won’t have built up any credit.

Earth Hour 2009 is a global initiative by the World Wide Fund for Nature which acts as a worldwide call to action to every individual, business and community to take a stand against Climate Change.

To show your support, sign up now and commit to switching off your lights for one hour on Saturday, March 28th at 8:30pm. Originating in Sydney, Australia in 2007, the Earth Hour initiative proved more than worthwhile when it witnessed 2 million people coming together to switch off their lights for one hour for this vital cause.

Following on from this success, 2008 saw an estimated 50 million people taking part. Global landmarks such as the Golden Gate Bridge in San Francisco, Rome’s Colosseum and the Coca Cola billboard in Times Square, all stood in darkness, as symbols of hope for a cause that grows more urgent by the hour.

This year, 2009, Earth Hour will see the lights go out on some of the most recognised attractions on the planet, including Cape Town’s Table Mountain, Christ the Redeemer in Rio de Janeiro, Merlion in Singapore, Sydney Opera House, the iconic 6-star hotel, the Burj al Arab, in Dubai, Millennium Stadium in Cardiff and the world’s tallest constructed building, the Taipei 101.

Earth Hour 2009 has one major aim: to unite the citizens of the world in the fight against climate change in order to convince governments and world leaders that our planet cannot wait any longer. There simply isn’t enough time, and therefore 2009 is a colossally important, if not the most critical year, to take action on climate change. 2009 is the year we decide the future of our planet.
Posted by Joy of Light - Farrah's 2 Sense at 3:38 PM No comments:

Delivered through a meeting with the Prime minister on March 9, 2009


We, the undersigned Kenyan citizens and civil society organisations, have sought this meeting following the assassinations of Kingara Kamau and George Paul Oulu of the Oscar Foundation and a student last week.

We note that these assassinations come in the context of non-implementation of Agenda Items One and Two of the mediation process last year—that is, ending the violence and disarming and demobilising all armed groups and militias and restoring fundamental rights and freedoms;

On Agenda Item One, ending the violence and the disarmament and demobilisation of all armed groups and militias, we reiterate there the position of the human rights movement that the heavy-handed security approach is insufficient for the task and has also allowed for the security services to stigmatise young, un/deremployed males in low-income rural and urban areas leading to the disappearances and extrajudicial executions of the same. It has also allowed for the security services to extort money from the public on threat of the same;

On Agenda Item Two, the restoration of fundamental rights and freedoms, we reiterate the position of the human rights movement that the Constitutionally guaranteed rights of assembly, association and expression have been suspended since last year, allowing for the security services to harass, assault (including sexually assault) and illegally detain many human rights defenders seeking to legitimately and peacefully protest various government actions and inactions;

We further note that we raised these concerns at a meeting with the minister of Justice, National Cohesion and Constitutional Affairs last year, who promised us she would seek audience for us with the minister of Internal Security on the same—a promise that has not been honoured;

We finally note that last week’s assassinations have occasioned, as we believe they were intended to do, an atmosphere of fear and threat among human rights defenders who have consistently tried to demand that these concerns be addressed. As we speak, several human rights defenders who have documented, with evidence, these disappearances and extrajudicial executions, have received verbal threats, have had to move to safe houses within the country and have even had to leave the country;

This atmosphere of fear and threat has been fostered by the repeated statements of heads of security services, their spokespersons and the supposed government spokesperson linking human rights organisations themselves to armed groups and militias—accusations for which evidence has never been tendered to the public to support or formal charges brought against them in court;

In the immediate and short term:

1. That the government, through the President and the Prime minister, publicly reiterate their commitment to full implementation of Agenda Items One and Two—and the rights of all Kenyans to life, safety and security of the person, the freedoms of assembly, association and expression as well as the freedoms to be assumed innocent until proven guilty in a court of law;

2. That, concretely, the President and the Prime minister, demonstrate that commitment by offering financial support to the families of those assassinated with respect to funeral expenses and livelihood losses;

3. That, concretely, the President and the Prime minister, demonstrate that commitment by enabling the demonstration planned by University of Nairobi students for tomorrow, march 10, to protest the assassinations to proceed peacefully, with full support of the security services and with no negative consequences such as the closing of the University of Nairobi;

4. That the government, through the President and the Prime minister, publicly reiterate their commitment to human rights defenders by ensuring that all dis/misinformation being peddled to the public about them cease and by guaranteeing their protection from the increased levels of risk and threat resulting from last week’s assassinations;

5. That, concretely, the President and the Prime minister, demonstrate that commitment by proceeding with the independent investigation into the assassinations, for which the United States of America has already offered the services of its Federal Bureau of Investigations;

6. That, concretely, the President and the Prime minister, demonstrate that commitment by immediately dismissing from office, the Police Commissioner, the Police Spokesperson the head of the Criminal Investigations Unit, the Provincial Police Officer for Nairobi and the acting Officer in Charge of Police Division at Central Police station among others—who all bear direct political accountability (if not legal accountability) for the harassment, assault (including sexual assault) and illegal detentions of human rights defenders;

In the medium to long term:

8. That the government, through the President and Prime minister ensure the release to the public of any proposed laws and policies to address matters of security sector reform—such as those announced recently by the minister of Internal Security—to allow for public debate and discussion of the same;

9. That, concretely, the President and the Prime minister, push forward not only the laws and policies required for security sector reform, but also the core, critical and fundamental demand of the reports of both the Commission of Inquiry into the Post Elections Violence and the United Nations Special Rapporteur on Extrajudicial Executions—that for impartial, independent internal and external accountability mechanisms for all security services and the utilisation of those mechanisms to achieve individual legal accountability for all disappearances and extrajudicial executions of all individual security service members involved in the same;

10. That, concretely, the President and the Prime minister ensure the delivery to the public of a benchmarked and timebound plan of action on implementing the security sector reform proposals of the reports of the CIPEV and the UN SR;

11. Recognising the manner in which Kenya’s security agreements with bi/multilateral bodies (notably the governments of the United Kingdom and the USA as well as the European Commission) on matters ranging from anti-terrorism to training to piracy and regional peacekeeping capacity contribute to the apparent sense of impunity and lawlessness of our security services, that the President and the Prime minister arrange tripartite discussions between the government, such bi/multilaterals and civil society on the same to ensure that legitimate security interests being so pursued are not at the expense of fundamental rights and freedoms.

In conclusion, understanding that some of these demands need consultation and discussion within the government, we request a further meeting with you on the same within a week’s time at which the President and the minister of Internal Security are also present.

We thank you for your public statements on the concerns raised to date. We stress our willingness for dialogue with the government on these concerns (including constructive criticism on both sides). And we look forward to full implementation of Agendas Items One and Two of the mediation process.

With the support of:
Kenya National Commission on Human Rights (KNCHR)
Posted by Joy of Light - Farrah's 2 Sense at 7:10 AM No comments: 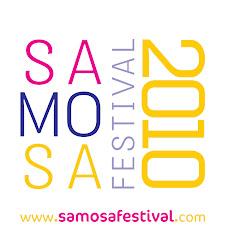 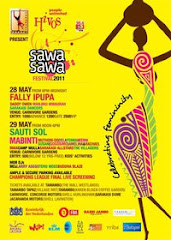 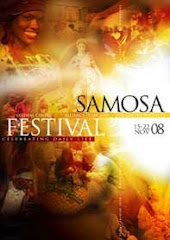 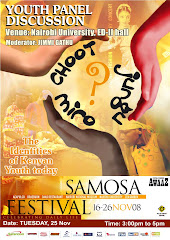 White Ribbon Campaign - A Call for a Tax Boycott